Psychological research on consumer behaviour, buying decisions and the workings of the brain has grown dramatically over the last few decades. This has provided marketers and retailers with insights to increase retail sales.

Dan Ariely – a professor of psychology claims that people are predictably irrational and behavioural science can help predict their behavioural patterns. Understanding the psychology of shoppers can help maximise the potential to increase retail sales and inevitably generate profit.

In this article, we’ll explore 3 effective psychological tactics that retailers do to sell more.

Many shoppers experience analysis paralysis – a phenomenon where there’s so much information that you feel overwhelmed and don’t know what to do!

Processing fluency is the human tendency to prefer things that are not only familiar but also easy to understand. This means that the easier it is to understand an offer, for example, the more likely people are to buy it. As a retailer it’s super important to get shoppers to decide on their first purchase, so pack your first offer with value and make it as easy as possible to buy. Once shoppers have a positive buying experience the first time, it’s likely to get repeat purchases.

A classic psychological study carried out in the 1950s demonstrated that the maximum amount of information an individual can hold in their memory is 7±2. If you were to present more than this number the buyer is unlikely to remember the details of each, making it difficult to make a choice or decision.

This rule also transfers to e-commerce, a study conducted by CXL Institute found that the way that products are described also matters. The format of text descriptions influences how people perceive the product itself.

Therefore, by simplifying information retailers are improving the ability to process it and improve engagement with their shoppers, inevitably leading to more sales. Many software companies stick with this magic formula (7±2) and offer an average of 3.5 packages. Limiting it to 3 or 4 options, makes comparison easy amongst potential shoppers which improves the ability to make a quick decision.

2. Use the decoy effect when pricing

Although a product may not be the best value, shoppers tend to pick the cheapest option. However, by activating the brain to choose an alternative option, things change.

Dan Ariely, discovered the decoy effect when The Economist made a mistake on their price page where they advertised the online version for $59 dollars, print version for $125 dollars and an alternative offer- $125 dollars for both. He took this pricing page and conducted experiments with students, and interestingly found that 84% of students opted for the combination deal and 16% for the print. However, without the unpopular print only option, 32% chose the combination option and 68% preferred to go web-only. The presence of an obviously inferior option altered the decision process by making the combined option appear as the best deal.

We see the decoy effect in our daily lives. When buying a coffee if the prices were presented this way most people would choose the least expensive option as they’ll perceive the large coffee as too expensive. 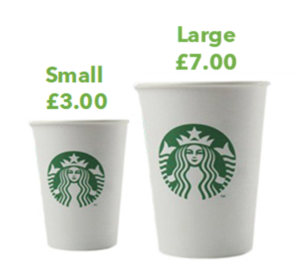 However, by introducing a third alternative – medium most people would buy a large coffee as their perception changes in that for 50p more the large coffee is a bargain. 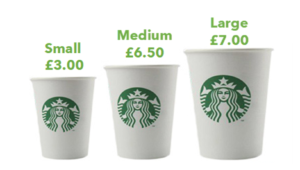 Retailers can apply this as a pricing strategy to select a product they wish to increase retail sales for and then create two more price points by applying the decoy effect.

People who reach a goal and then discover that it wasn’t worth the effort often feel the need to justify the effort they put into it. According to the theory of effort justification, people will believe a goal is worthwhile if they have worked hard to get there. So, even if they never reach their goal, they will justify their actions as being worthwhile. Effort justification is based on the psychological theory of cognitive dissonance, which claims that when people’s behaviours and beliefs don’t align, they experience discomfort. To relieve that discomfort, people often change their beliefs to match their behaviour.

In a study carried out in 2011 by Dan Ariely et al, famously known as the IKEA effect two groups of participants were given Ikea boxes. One group received fully assembled boxes whilst the other received unassembled boxes, which they were told to put together. Findings revealed that the second group were willing to pay significantly more for their box during the bidding process compared to those with pre-assembled boxes.

Although the IKEA effect was named in 2011, many researchers had been investigating this phenomenon many decades prior. In the 1950s a US manufacturer first introduced baking mixes onto the market which failed to prove success. It was only when the company changed the recipe so that customers had to add an egg at home that the popularity of the mixes took off.

This research demonstrates that humans are likely to pay more for something that they’ve invested labour into rather than something that is ready-made, our efforts lead to an increase in valuation when we complete tasks successfully.

The relationship between companies and shoppers has changed ever since. Instead of being passive shoppers, they are increasingly seen as co-developers of a product. Retailers should find creative ways of involving their customers in the product design to take advantage of the IKEA effect. For example, retailers are already engaging with shoppers in ways listed below:

At Spark Emotions, we have over 20 years of experience conducting shopper research around the globe. Our team of consumer psychologists and industry experts are able to translate shopper behaviour to help identify what it really means to help increase retail sales. We provide actionable insights, that gives our clients clear guidance on how to implement the insights to help drive business growth. Check our case studies on how we’ve helped some of our clients get to the truth of their shoppers’ behaviour. 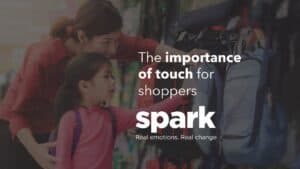 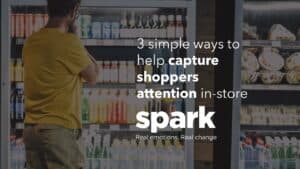 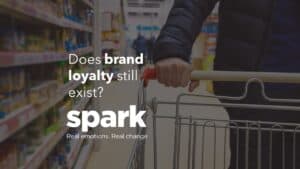 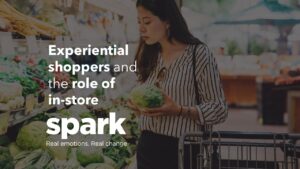 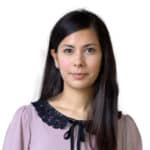 Written by Binna Chopra, Research Manager at Spark Emotions
If you have any questions, feel free to reach out to Binna via email binna.chopra@sparkemotions.com or connect with her on LinkedIn

One thought on “3 things retailers do to increase retail sales”